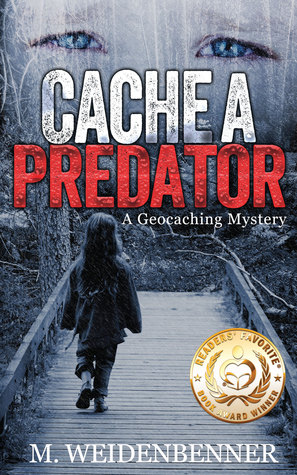 Cache a Predator is a geocaching thriller about a father’s love, justice, and the unhinged game of hide-the-cache.

Officer Brett Reed will do anything to gain custody of his five-year-old daughter, Quinn. But when a judge grants Brett’s drug-addicted ex-wife custody and slaps him with a protective order for losing his temper, he fears for Quinn’s safety. Who will protect her now?

When Quinn is found abandoned on the streets, she’s placed in a temporary foster home until Child Protective Services can complete an assessment. It should only take a few days.

But a lot can happen in a few days.

Especially when there’s a deranged psychopath on the loose, someone who’s attacking pedophiles, someone who wants to protect children like Quinn, and someone who’s planting body parts in geocaching sites.

This book is hidden in cache sites all over the US and Canada with the goal for it to travel to all 50 states. It’s mission is to spread awareness of child abuse and how it harms victims, families, and communities.

Michelle Weidenbenner has written a great mystery/thriller for her first novel. She does an excellent job introducing all the characters and how they all relate to one another and the storyline.

Officer Brett Reed loves his daughter, Quinn, and will do anything it takes to keep her safe. Only she isn’t safe … Brett lost the custody battle to his depressed, drug addict ex-wife who is always either wasted or hung over. When Quinn is found wondering the streets alone, she is placed in foster care until both parents are interviewed.

Meanwhile, someone is maiming male pedophiles from the community and hiding the “trophies” in local geocaching sites. The police follow leads they get from studying the cases of the victim’s victims to try to catch this psychopath.

The author ties all the ends together nicely with an edge of your seat ending complete with twists and turns. I hope she plans on a sequel to this story … I already miss the characters and want to see how they continue on.

Buy the Book from……

“The author has developed her innate talent to frame events with a clarity and color that keeps the reader anxious to turn the page to get to the next level of interest.”

“”This book is like watching Criminal Minds or Law and Order.”

Midwest Review said, “Any who look for deep psychological elements in their mysteries will find this a satisfying read, moving beyond the usual one-dimensional focus on mystery to reach out and tweak the reader’s heart.” – D. Donovan, eBook Reviewer

Michelle grew up in the suburbs of Detroit with five brothers. She enjoys writing her novels and encouraging writers and readers alike. She is living her dream writing stories of real people searching for their dreams and confronting their fears, showing the passion of the characters’ plights, often giving her the ability to show the reader the ‘other’ side of the story. When she is not writing she enjoys life on the tennis court and is known as “Queen of the Rim Shots.”

Her debut novel, CACHE a PREDATOR, a geocaching mystery. was launched in July, 2013 and has been an Amazon best-seller in the crime/thriller category.  Her other works include: Willow, Scattered Links, Kelly’s Story, Eclair Series, and The Vision in a Kiss.  She has won contests in both The Writer’s Journal and The Writer’s Digest. Love is Just a Word (Scattered Links) was a bronze medalist is the 2010 Frasier Contest, a 2011 semi-finalist in the ACFW Genesis Contest, and won the Aspiring Writer’s Contest withe THE READING ROOM, 2013. 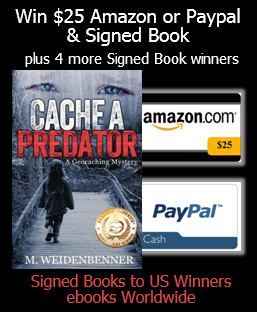